I can not express to you in mere words how excited I have been about the arrival of my new Monthly Subscription Box, and about how much I've been looking forward to sharing all of my lovely goodies with you all!

Firstly, for those of you who don't have a clue what I am on about, I'll explain a little about Illumicrate and what it does. It is a UK based YA Book Subscription Box, sent every quarter and containing a brand new YA release alongside an abundance of goodies for subscribers to enjoy. It is run by the lovely Daphne at Winged Reviews and I'm so glad that she set it up because although I've seen a ton of US Book Subscription services (which due to shipping costs are far too expensive), there are very few decent ones in the UK and none as decently priced as Illumicrate.

This is the first ever Unboxing post I've ever done so I'll try and be thorough because I really want to give everyone an idea of exactly what they'll be receiving and promote Daphne's amazing new service. I subscribed (after much deliberation because I'd never done anything like it before) early October for the November Box. When the beginning of November finally came round you can imagine that I was very excited. I received an email telling me my box had been sent on the 12th, and was absolutely flabbergasted by the surprisingly speedy shipping time because I then received it just two days later, on Saturday 14th November! 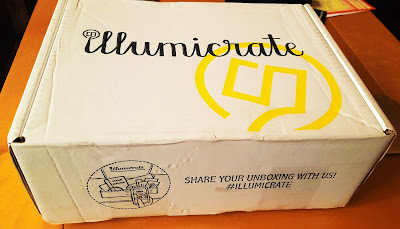 My first impression of the box was also a good one: it had a very minimalistic yet effective design which caught the eye and got me overly enthusiastic about that morning's post because I instantly knew what it was. In terms of packaging, I think Daphne did a great job! Not only was the box design great, but she'd gone to a lot of trouble to pad it out properly with yellow paper shred (to match the colour scheme) and pretty coloured bit's of tape and ribbon where needed to keep everything secure and neat. I loved that the box was divided into two layers, with the book being the last thing to be revealed. It certainly heightened the suspense and made the unboxing all the more of a great experience for me!

So what was inside you ask? Well I'll start with the items written on the official packing list because they are really good ones and then I'll briefly cover some of the little extras that Daphne threw in for good measure. 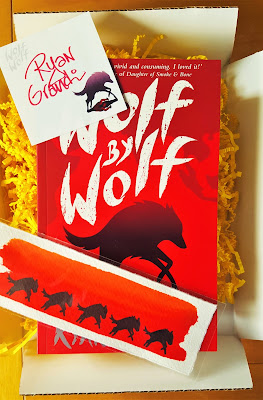 THE BOOK: 'Wolf By Wolf'; Ryan Graudin (Paperback). Thank you, thank you and a thousand times thank you! I read 'The Walled City' earlier this year and was very impressed by it. As soon as I saw that Ryan Graudin was releasing another book I wanted so desperately to get my hands on it and thanks to Daphne, I did! It was released on October 20th so is relatively new, which I'm pleased to see. The Book came with a signed Book Plate from Graudin herself, and a link & password to watch an exclusive video also recorded by Graudin which was a lot of fun to watch and a nice surprise. 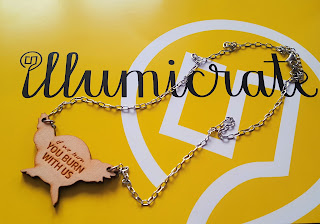 Mockingjay Necklace. The items included in this book weren't all related just to Graudin's book, Daphne decided to include quite a bit of Bookish variety! This necklace, simple in it's design, was another exclusive piece in order to celebrate the upcoming release of Hunger Games: Mockingjay Part II. It features a famous movie quote and I'll certainly be wearing it when I go to watch the film! It was designed and crafted by My Clockwork Castle who feature some really gorgeous theme-punk inspired jewellry on there website. 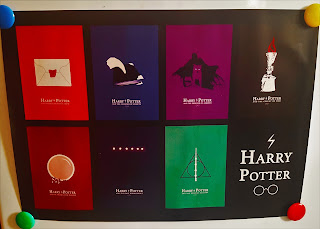 Harry Potter Series Poster. There aren't that many people who don't love Harry Potter. I for one adore those books and so I was very happy to see this gorgeously designed exclusive A3 Poster that features all seven of Abbie Imagine's beautifully rendered cover redesigns. I've put it up on our fridge using the aptly coloured fridge magnets and there it shall be displayed proudly for a while to come! It was all wrapped up like a scroll when I opened this box and I even joked (not knowing what it was) that my Hogwarts letter had finally arrived! 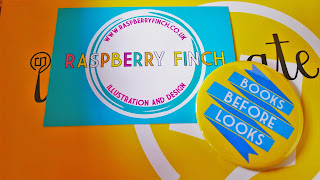 Books Before Looks Pocket Mirror. I've actually been in need of a pocket mirror so this little gift left me pleased as Punch! It has a really great quote too, which should really be everyone's mantra (in my opinion) but I really loved it's sense of irony. This gift had an exclusive colour scheme which is very pretty and I have to say I'm pretty impressed with all the exclusive items that Daphne has managed. Head on over to Raspberry Finch to see a ton of other pretty illustrations and gift ideas!

And those are the five main inclusions for the book, well worth the £29.99 a quarter cost (especially as it's free shipping for the UK)! Alongside these wonderful inclusions, Daphne managed to secure some very generous discounts from the above mentioned shops which I'll certainly be making great use of. I'm a big believer in supporting small and indie businesses and Daphne's picked some really good ones for this first box! I can't wait to see what else she manages in later boxes! 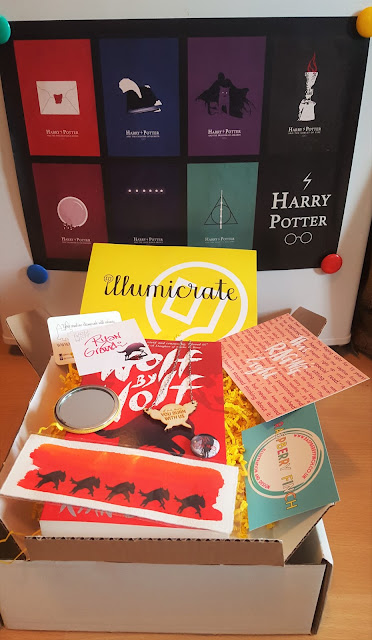 There were also a couple of little fun extras which I'll briefly mention:

The first was a badge for Leigh Bardugo's 'Six Of Crows'. I recently won this book as a prize for winning a challenge and I'm really excited to read it! This badge is very cute and I shall be pinning it to my bag ASAP.

The second is a cute little postcard advertising an upcoming YA release, 'This Raging Light' by Estelle Laure. I want to draw particular attention to the message on the back which, in light of recent events in Paris and Lebanon among other places in the world who are suffering, I really feel is important to highlight:

'Nominate someone you know who has done a kind deed. Nominations can be posted to #RagingKindness on Twitter, Facebook, Tumblr or Instagram. Each week, from now until publication, we will pick one nominated person to receive a #RagingKindness gift package through the post.

What a lovely message to end such a fun post on! As humans, we have a job to try and make the world a better place and we can do that by supporting each other, being kind and showing those who want to make the world bad that we will not be miserable and scared just because they want us to be. Please do spread this idea on in honour of all those that were victims of those terrible tragedies and to remind everyone that kindness does still exist.

This post ended up getting a little more serious at the end, but I hope everyone enjoyed this post and you are all inspired to grab Daphne's next box as soon as it's released (February 2016 I think). Thank you so much Illumicrate for such a great selection of items and a wonderful book for me to enjoy!
Posted by Chased By My Imagination at 15:31