So, reading-wise, I didn't really do all that well. I managed four of my eight chosen reads and I'm a little disappointed. I'm actually falling massively behind on my Goodreads challenge too so I'm hoping that September will be a lot better. But I still read some really great books!

This month I have read one book for the Netgalley & Edelweiss Challenge, bringing my yearly total so far to nineteen. My read was:

This month I have read one book for the 2017 New Releases Challenge, bringing my yearly total so far to nine. My read was:

This month I have read one book for the LGBTQIA Challenge, bringing my yearly total to nine. My read was:

- If I Was Your Girl

This month I have read three books for the Diverse Reads Challenge, bringing my yearly total to twenty five. My reads were: 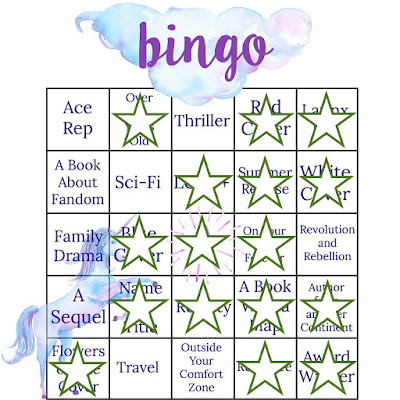 Over 5 Years Old: Green Rider; Kristen Britain.
Red Cover: Good Bones; Margaret Atwood.
Latinx MC: One Of Us Is Lying; Karen M. McManus.
LGBT+: Release; Patrick Ness.
Summer Release: Not A Drop To Drink; Mindy McGinnis.
White Cover: A List Of Cages; Robin Roe.
Blue Cover: Good Night Stories For Rebel Girls; Francesca Cavallo & Elena Favilli.
On My TBR Forever: The Sleeping Prince; Melinda Salisbury.
Name In Title: The One Memory Of Flora Banks; Emily Barr.
Royalty: Flame In The Mist; Renée Ahdieh.
A Book With A Map: The Final Empire; Brandon Sanderson.
Author From Another Continent: The Sun Is Also A Star; Nicola Yoon.
Flowers On The Cover: What Is Not Yours Is Not Yours; Helen Oyeyemi.
Romance: If I Was Your Girl; Meredith Russo.
Award Winner: Through The Woods; Emily Carroll.
Posted by Chased By My Imagination at 20:11