I honestly feel like I've been waiting for this box for an absolute age, but then, it often feels that way because unboxing every few months is so exciting! This one was sent out a little late which Daphne did announce via Twitter, so didn't arrive until the beginning of March. I felt that perhaps an email to all subscribers explaining the situation wouldn't have gone amiss, but as Daphne has been so great for the last five boxes, I wasn't too disappointed!

No change in the design, this definitely seems to be what Daphne is sticking with and I really like it! The box was split into two layers again this month, which really helped to build the excitement and suspense. 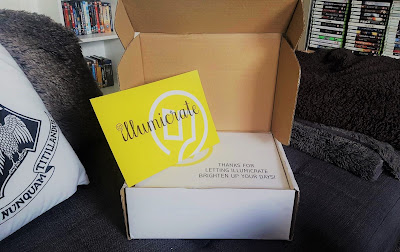 I have to say, there were far less items in this box than I'm used to so in comparison, I like some of the past boxes better. However, there were two books in this box too, and one is an ARC! That fact alone makes this three-monthly purchase a real treat, and worth both the wait and expense! 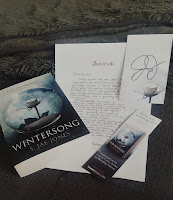 BOOK ONE: 'Wintersong' by S. Jae-Jones. Oh. My. Gosh. I can't believe that Daphne picks this book! Each and every month, it's as if she reads my mind and this was one of the books that I had been really hoping for because I want to read it so badly! For those that love the classic film 'Labyrinth' starring David Bowie, this is definitely going to be a book for you. It features a young girl, a Goblin King, and a mission to rescue a lost sibling. Seriously everything about this book appeals to me, and I squealed so much when I pulled this book out of the box! I'm still squealing now! This book also came with a letter from S. Jae Jones, a signed book plate and a cute bookmark too! 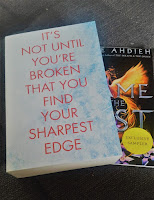 BOOK TWO: 'Red Sister' by Mark Lawrence. So I wasn't expecting this book at all when I pulled it out, and I have to say that I couldn't believe how huge it was! I'm talking 600+ pages! But I was also very pleased because Mark Lawrence is an author that I've ad my eye on for a while, being a fan of Epic Fantasy authors such as George R.R. Martin and Patrick Rothfuss. The synopsis for this book sounds really cool too, right up my alley! I can't wait to give it a go and see how I get on with it, so thank you so much for the ARC Daphne! 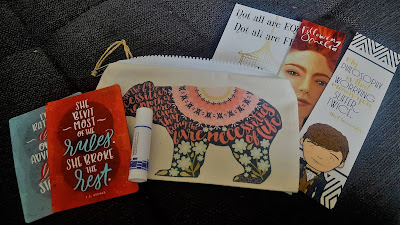 Bare Necessities Pouch: I pretty much started hyperventilating when I saw this because it is so freaking cute! I'm a huge Jungle Book fan and I fan-girl over anything related to it. This totally matches my Jungle Book tote bag! Also, I'm thinking of taking up Bullet Journalling, so this will be extremely useful for holding pens and tools for that! Also, I stalked the Literary Lifestyle Company's website and their are so many cool and unusual things to buy on their, with gorgeous designs! I highly recommend taking a look!

Magic & Mischief Balm: So I get very dry lips. A lot. Any kind of balm is useful to me because it use it so much! I've tried it a couple of times and I really like it. Plain and simple packaging, with a smell of coconut that I like a lot though the balm itself is actually tasteless. It applies pretty well and tingles a little which makes me feel like it's doing something. This is definitely a handy one that will go in my bag. This balm is called 'Magic & Mischief', but there are plenty of other kinds at Bookish Serendipity Co.

A Darker Shade Of Magnets: I'm getting the distinct feeling that Daphne is a fan of V.E. Schwab, considering the amount of Illumicrate goodies I now own related to the 'Shades Of Magic' series! I haven't got round to reading it myself yet, though I'm planning to in the  next couple of months and I really like these magnets. They are definitely going on my freezer! Her Bookish Things is taking a break right now, but it looks like they sell some really nice designs for prints and bookmarks, so I'll be keeping an eye out for when they're back!

Newt Scamander Bookmark: Who loved 'Fantastic Beasts & Where To Find Them'? I did! Jane's Tiny Things made the cutest looking bookmark of Newt's face, and having browsed the website, she makes a lot of fun magnetic bookmarks too! This was such a fun addition!

I also received some other extras from this box:

- 'Following Ophelia' Bookmark
- 'Flame In The Mist' Sampler
- 'Gilded Cage' Postcard
Posted by Chased By My Imagination at 17:21