Things went a little off track this month in that while I'd planned reads, I ended up reading a fair few books that weren't on the original list. This meant that I only managed five of the seven reads from my Planned Reads For November post. However, that's actually not too bad, and I did manage a couple of other, much shorter reads on top bringing my total for the month to seven! Wahoo!

This month I have read six books for Pretty Deadly Review's Backlist Challenge, bringing my yearly total so far to fourty four. This month's reads were:

- 'The Dead House' by Dawn Kurtagich
- 'The Lie Tree' by Frances Hardinge
- The Bazaar Of Bad Dreams' by Stephen King
- 'We Should All Be Feminists' by Chimamanda Ngozi Adichie
- 'The Ice Dragon' by George R.R. Martin
- 'Fangirl' by Rainbow Rowell

This month I have read one book for Falling For YA's Netgalley & Edelweiss Challenge bringing my yearly total so far to sixteen. This month's read was:

- 'The Dead House' by Dawn Kurtagich

This month I have read one book for [un]Conventional Reviews' New Releases Challenge, bringing my yearly total so far to fifteen. The books I read were:

This month I have read zero book for Daily Prophecy's Retelling Challenge, bringing my yearly total to ten.


I also updated my Bookish Bingo card, and here are this trimester's results! 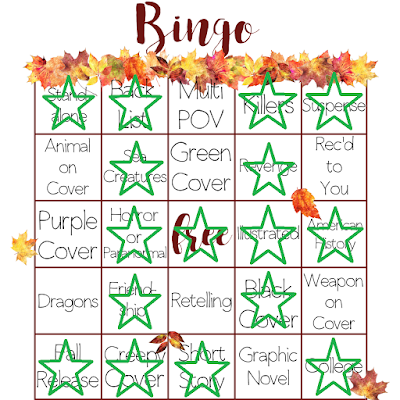