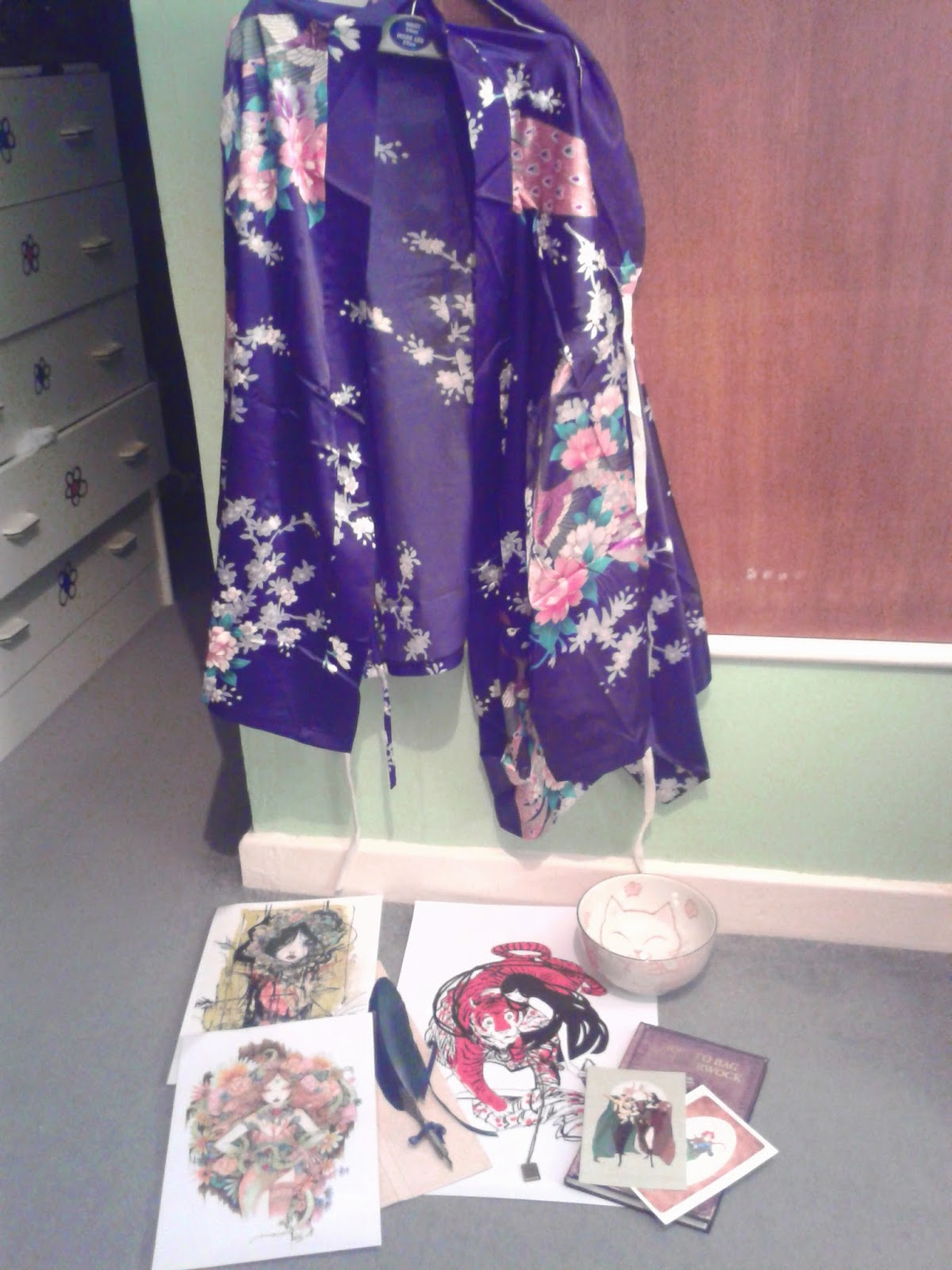 Wow! What a day! My first ever ComicCon and I had such a good time. It's all I've done all day basically so this post will be totally dedicated to what I picked up while I was there! A sort of ComicCon haul if you like! So the picture above shows my stash! Quite a variety, a Kimono (which I hope to get better pictures of), art, a Quill, a bowl, a book and jewelry! I did also order a Tee Shirt but can't picture it here, as obviously it hasn't actually arrived yet. 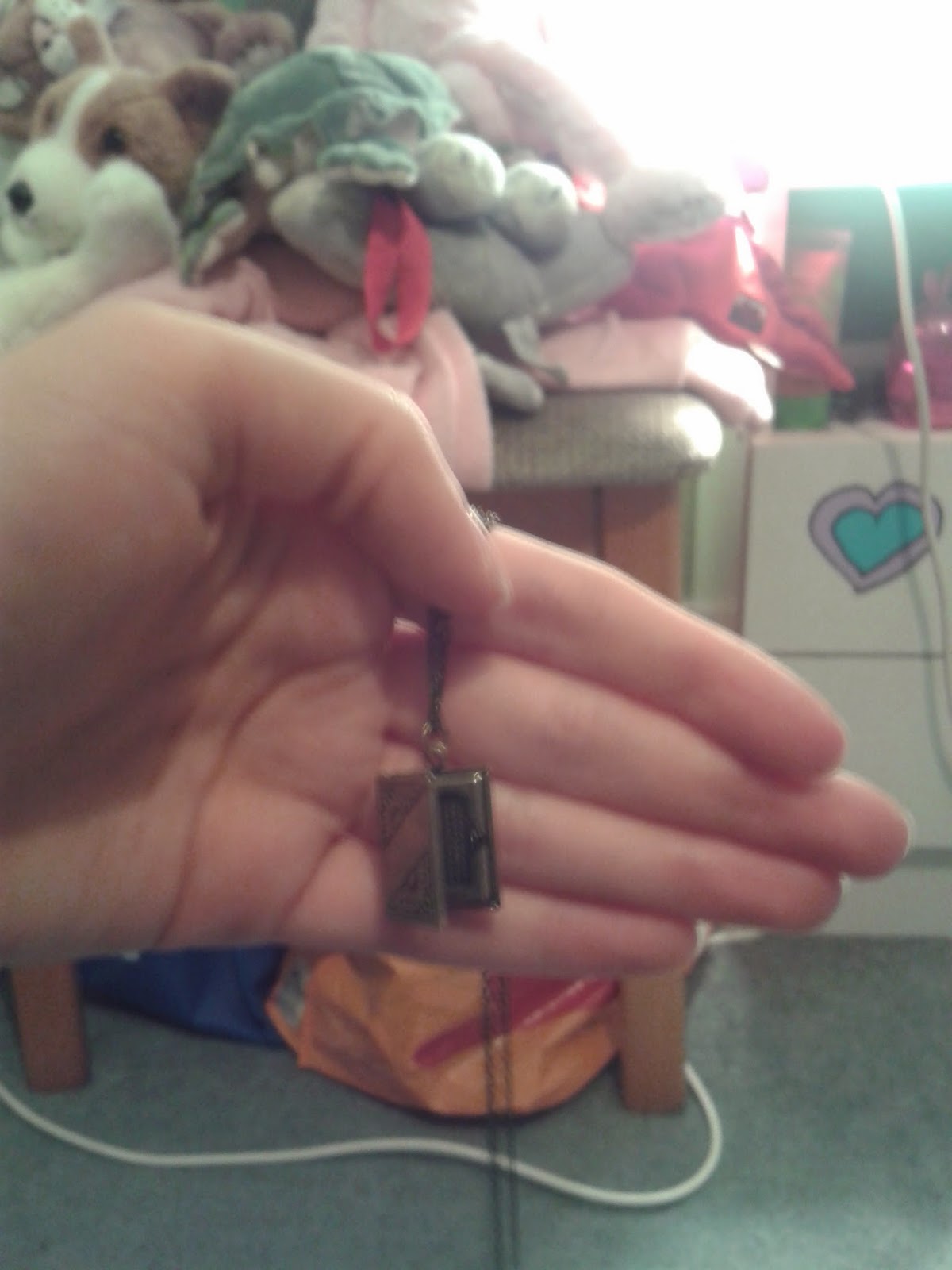 Ok so I'll start with my first purchase. If you read my earlier Wishlist that I posted, I mentioned Coucou Heart had a little stall. I had never heard of this small Jewelry business before but their pieces were adorable! I bought from them a small locket in the shape of a book because I think it is most fitting in all honesty! I am after all, a huge fan of books! I did see some other pieces, such as a Wishbone shaped necklace that made me think of Karou from Daughter Of Smoke & Bone, and a couple of Alice In Wonderland styled pendants. I left those behind however in favour of the locket! Check out their website, they have some beautiful pieces on there! sorry about the terrible pictures, as usual. I really do try! 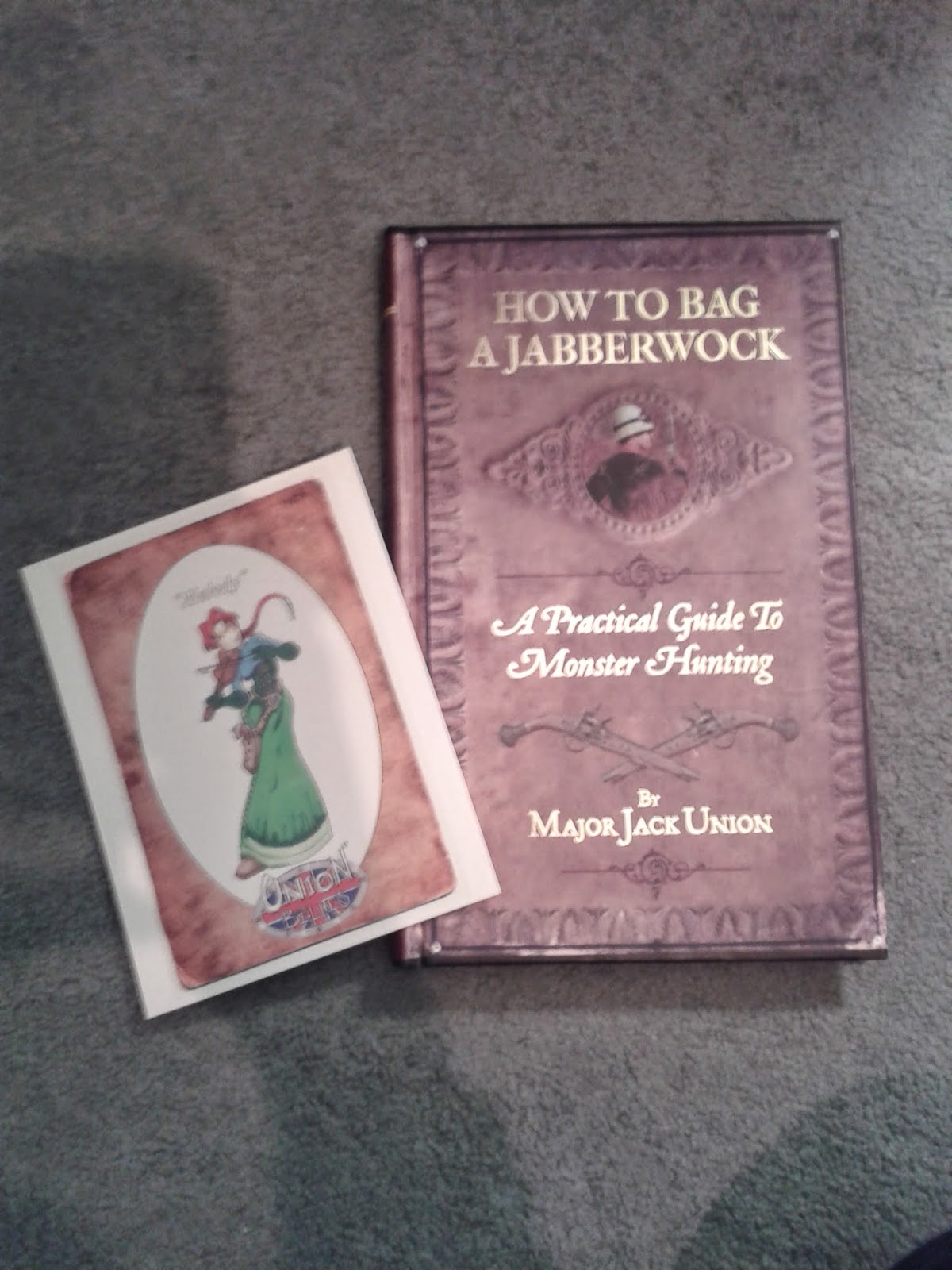 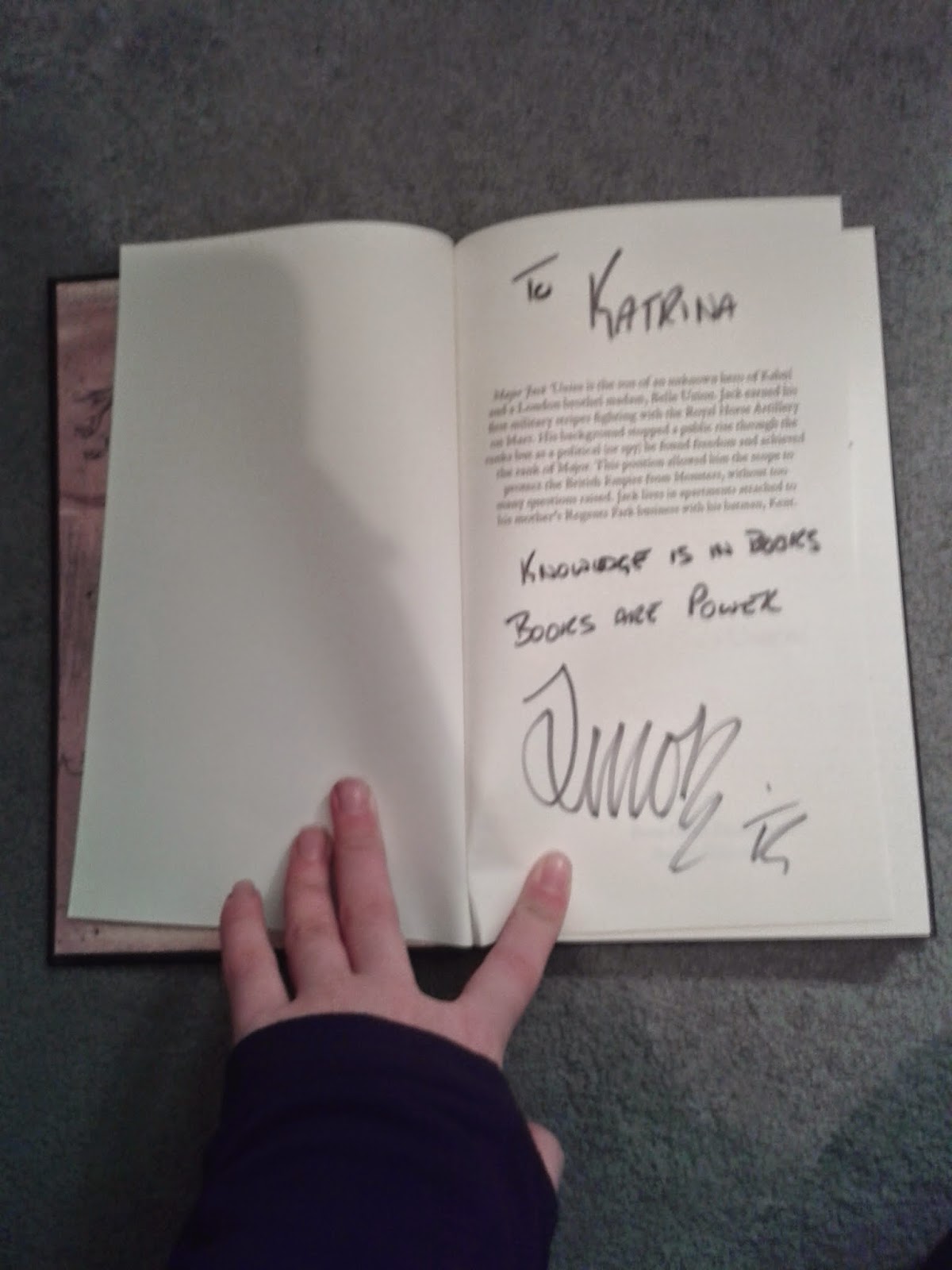 Next on the list was probably very naughty of me, but I think it might be my favourite purchase. I went to ComicCon expecting Cosplay, Anime, Comics, Japanese madness, art, and plenty of merchandise. What I did not expect was books! And there were actually a few book stalls set up by publishers which I did have a nose at. I'm on a book buying ban as you know but I'm afraid I broke it today (it won't happen again readers I swear...). I met a very lovely chap by the name of Kit Cox (or Major Jack Union) who's written a really interesting looking book, 'How To Bag A Jabberwock'. It instantly grabbed my attention and he was very lovely, both of us agreeing that ComicCon would be so much fun if more literature was involved! He signed my book and in case you were wondering, he has another book on the way called 'The Monster Hunter: The Adventures Of Benjamin Gaul' which looks to be a promising Steampunk adventure that I'll certainly be looking out for! For now though, I can't wait to have a read of my new purchase (now Uni is over, I will have so much time on my hands) and hopefully post a review, so look out for that in the not-too-distant-future! 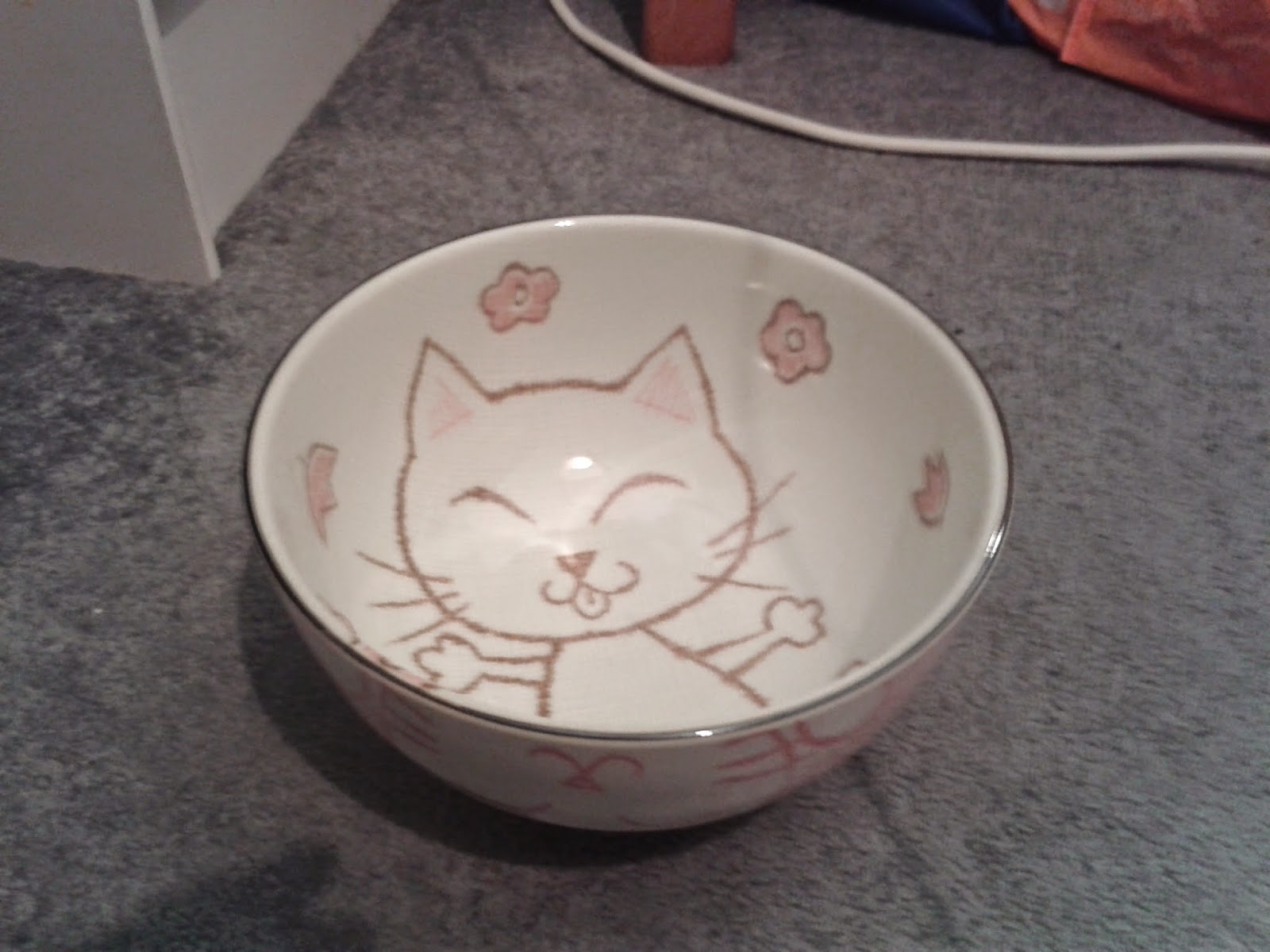 Now what's next? A bowl? Why not! Japanese culture has always fascinated me and in particular, their Tea ceremonies. I was transfixed by the Doki store, their crockery, ornaments and ceramics were gorgeous. And they had tea sets! In the end however, I went with a beautiful bowl (my current breakfast bowl has a massive crack down the side and I feel it's end draws ever closer) that has a cute little cat on it! I'm quite fond of cats! It's a bit big but will serve it's purpose, and was a really good price! A tea set next time perhaps, when I'm a little less overwhelmed and indecisive.

Next, I'll put the pictures of the Art Prints I nabbed from Comic Village. They were absolutely beautiful and I really couldn't say no! I've put the pictures below and I'll go through in order. The first two prints are drawn by a really talented lady who can be found at Lalas Dreambox. I fell in love with all of her prints but these were two of my favourites and I couldn't leave without them! The second picture was really fulfilling a personal love for a certain film/comic character! I'm a little Loki obsessed and most stalls had run out of merchandise associated with him (clearly I'm not the only Loki fan about)! But this print caught my eye, and the artist can be found here. All of her drawings were really cool, I wish I could have bought more! The third and final art was drawn by a lovely lady found at this link. Such a talented artist, I really struggled to choose between pieces but this one with the tiger really caught my eye! what a beautiful piece! 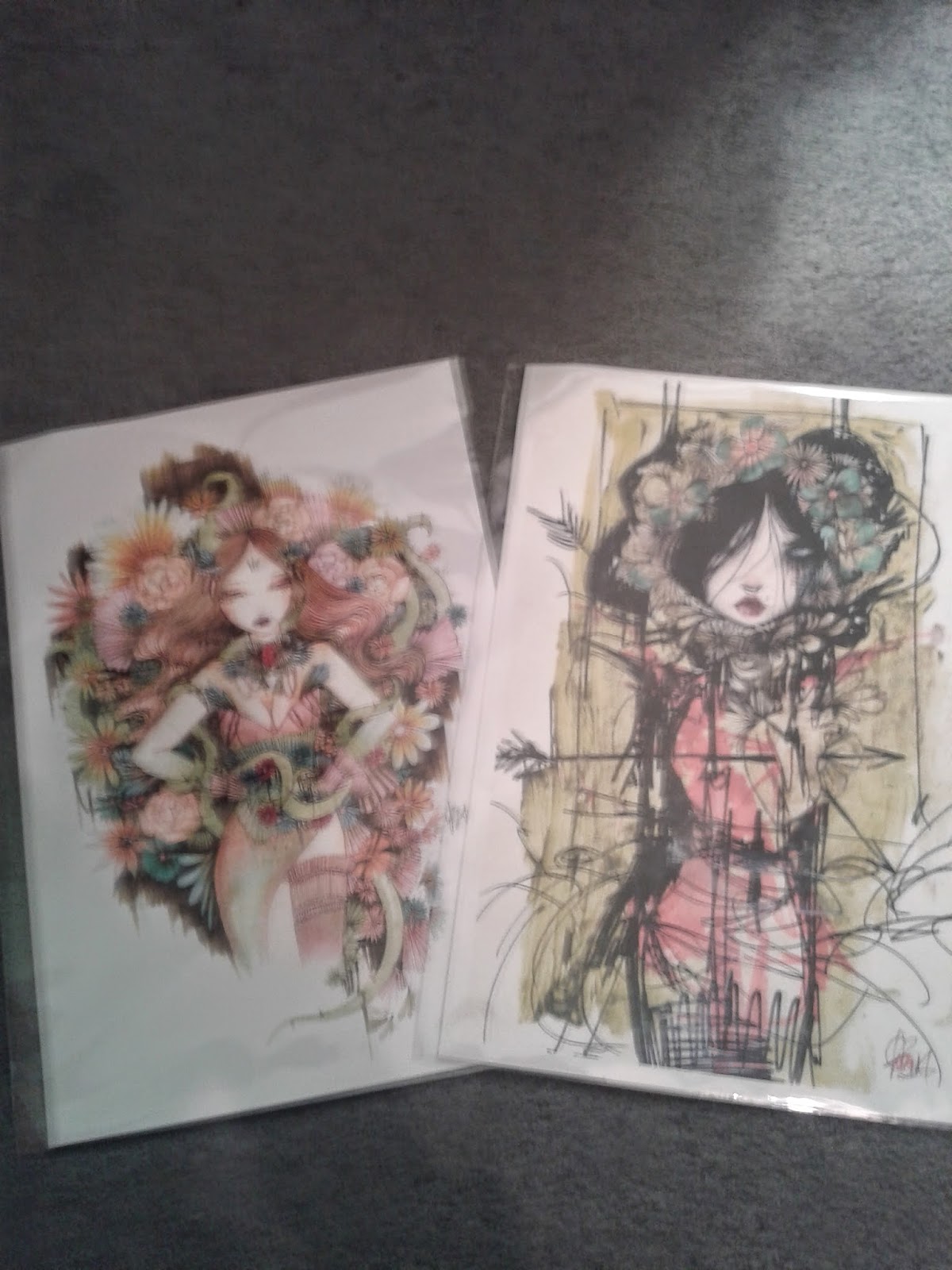 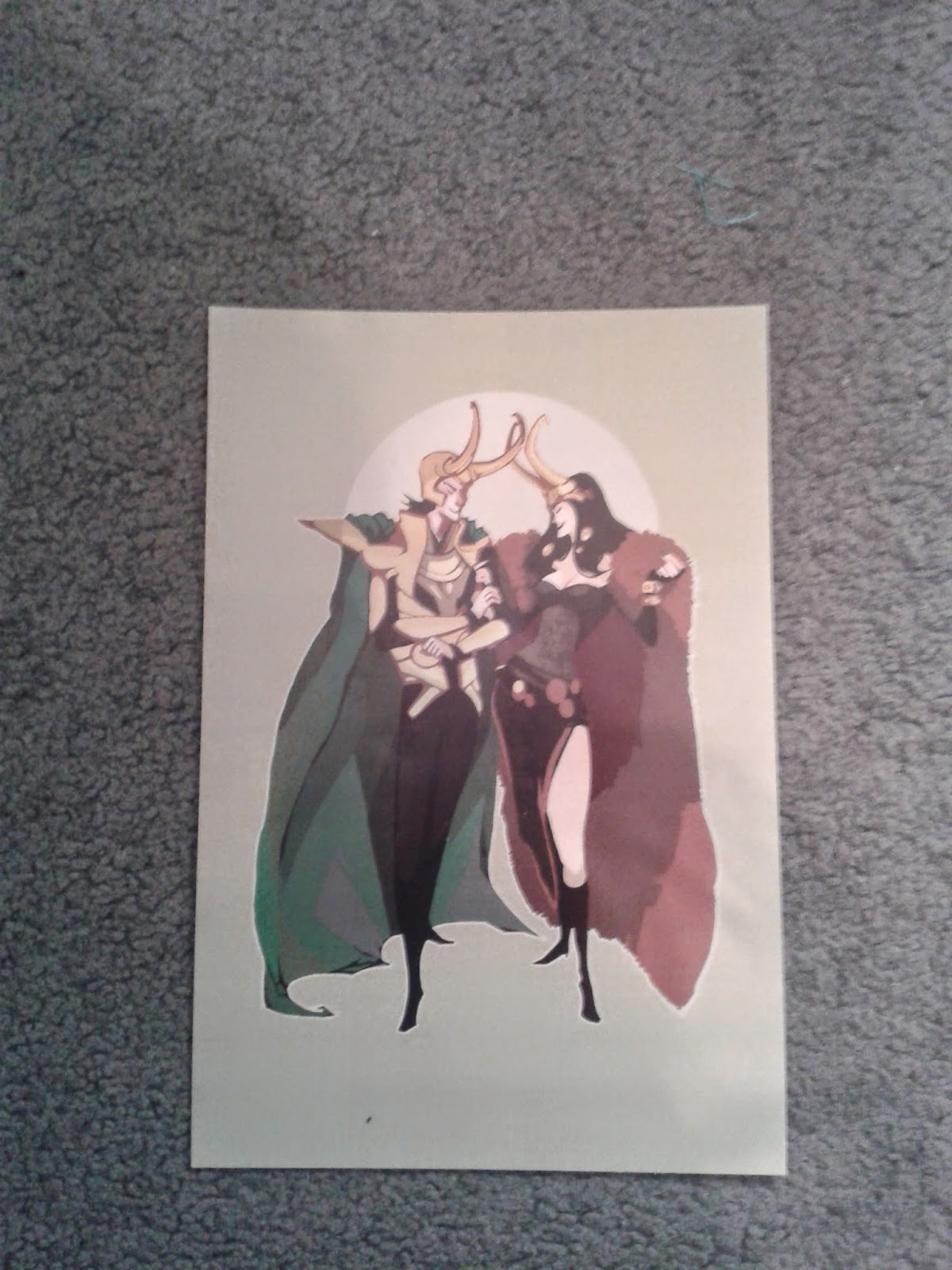 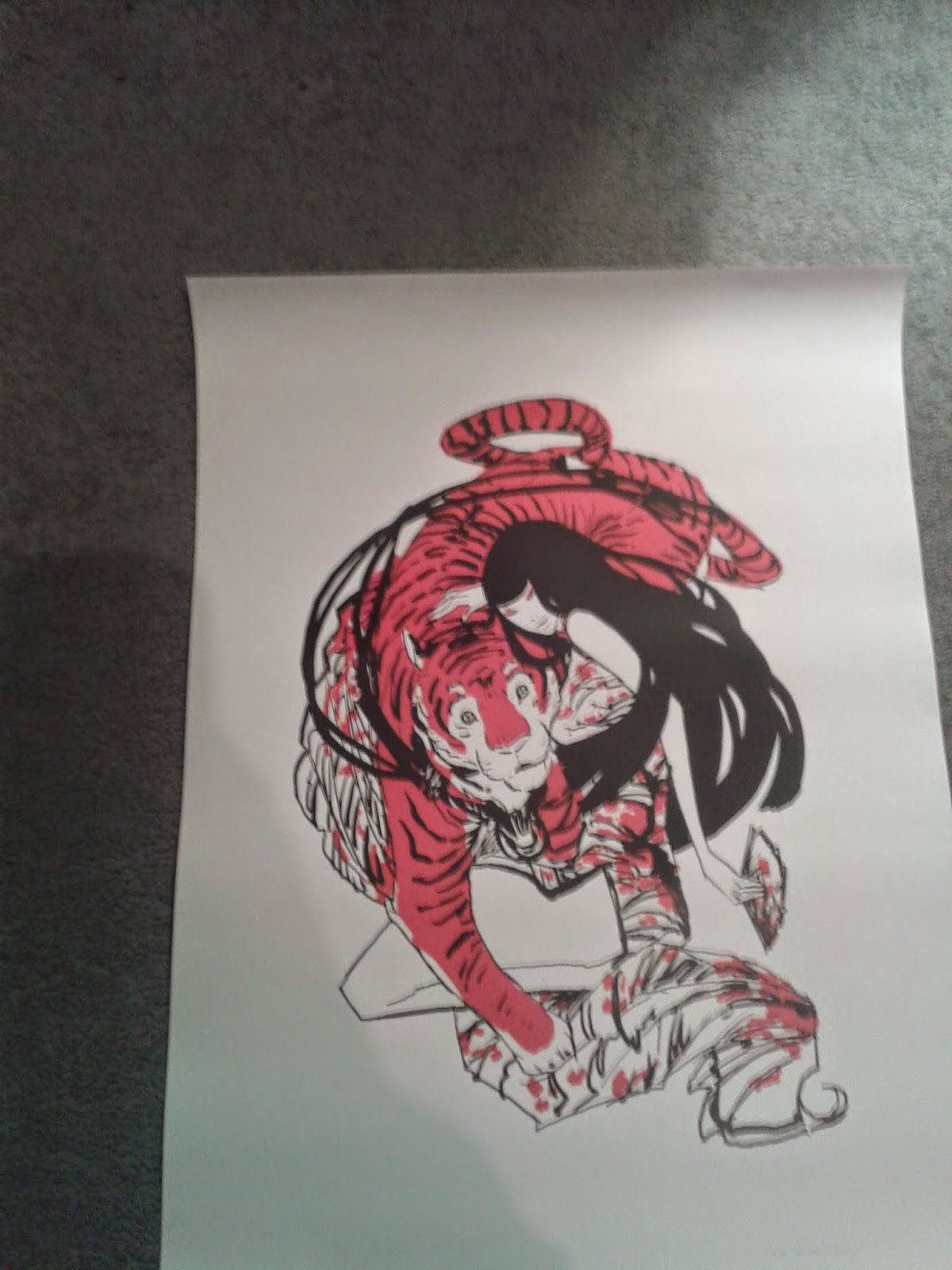 Whew! Almost done! I'll talk briefly on the other bits and bobs I bought. These included; a gorgeous green quill (I plan to get ink and learn to do calligraphy properly, I've always admired it!), a beautiful black Kimono that came with a traditional belt (I really need to get a decent picture), and a Tee Shirt mentioned earlier in my Weekly Wishlist (I ordered it so it has yet to arrive, but I'm very excited! It has a Studio Ghibli theme!)

Well that about sums up my day at the Expo! I hope everyone really enjoyed their Sundays and managed to have a nice lazy one, unlike me. I got up at quarter past six this morning and my feet are killing me after walking around for six hours! It was definitely worth it though.
Posted by Chased By My Imagination at 23:48