This month has been much better for me than it was before! I actually read five books! One of them wasn't on my intended TBR, but I'm still very pleased with my progress and can't wait to share my reads with you!

This month I have read two books for the Netgalley & Edelweiss Challenge, bringing my yearly total so far to thirteen. My reads were:

This month I have read two books for the 2017 New Releases Challenge, bringing my yearly total so far to four. My reads were:

- Dear Ijeawele, Or A Feminist Manifesto In Fifteen Suggestions
- Noteworthy

This month I have read one book for the LGBTQIA Challenge, bringing my yearly total to six. My reads were:

This month I have read two books for the Diverse Reads Challenge, bringing my yearly total to seventeen. My reads were:

Next up, here's how my Bookish Bingo card ended up for the final month of the challenge! 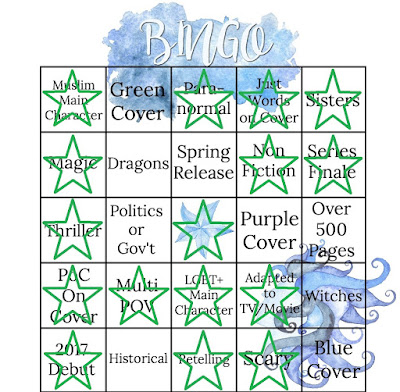