The first Saturday of August? It can only be time for Six Degrees Of Separation! I  almost forget this so many times, but it's so much fun and I really don't ever want to stop doing it! Hosted by Annabel Smith and Emma Chapman, I really recommend giving this challenge a go. 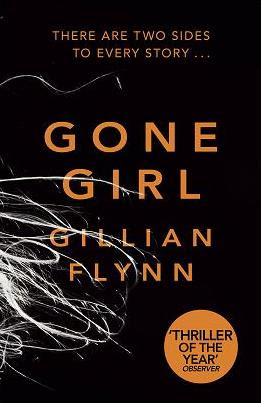 This month's book is Gillian Flynn's 'Gone Girl', yet another book I haven't actually read. I know a little more about this one because there's a movie coming out for it soon, but I'll be going off first impressions rather than actual book knowledge!

So to start with, 'Gone Girl', as far as I can tell, is about a girl that goes missing. 'Paper Towns' focuses on a similar plot-line. Both girls are headstrong, a bit strange and certainly induce strong feelings in the main male characters (to an almost obsessive point), who are hopelessly in love with the girl/woman in question. Also, there's a character called Margo in both books!

'Paper Towns' is written by John Green, as is 'The Fault In Our Stars'. This book was my first ever John Green read and I adored it. I thought it's take on the tender subject of Terminal Illness was tragically realistic and I cried so much while reading this book.

Another book that I read a while back which gave me my first real taste of a book about Illness was 'Before I Die' by Jenny Downham. I cried ridiculous amounts and recommend it to anyone who liked 'The Fault In Our Stars'. It's take is a little more serious perhaps, but it's still a great contender and absolutely heart-wrenching.

'Before I Die' is the first book and only book by Jenny Downham that I have read. 'This Lullaby' is my only Sarah Dessen read. It's not that I didn't enjoy it, I did! I just didn't totally love it and to be honest, I found the lead girl irritatingly stubborn for her own good. I completely questioned why such a sweet guy like Dexter would even consider such a horrible person!

Talking of main characters I didn't like, I think it's time I brought 'Twilight' into the mix. Bella Swan was the complete opposite of Remy from 'This Lullaby'. She was moody enough, but in a simpering, awkward way. Instead of being too anti-boy, I found she was too needy and so disliked er in equal amounts, but for completely different reasons.

Any time I included 'Twilight', 'Finding Sky' was always going to be linked. Why? Because it followed the same sort of formula, but did it so much better. No annoying main girl, not such a clingy love interest, no 'main character is an instant school outcast and the few friends she makes are awful' problems. The one thing I liked about 'Twilight' was the villains, and I liked the ones here too. Much better.
Posted by Chased By My Imagination at 16:13